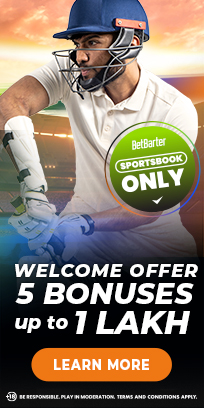 This promotion is valid during October and November weekends in between the matches of the Indian Premier League (Cricket).

Starting on the first weekend of October, IPL will have two matches on Saturday and two matches on Sunday. The first match begins at 15:30 IST and the second match begins at 19:30 IST. For complete clarity this promotion is available for daily net losses on the period between the start of the first match (15:30 IST) and the start of the second match (19:30 IST),

All Betbarter players are eligible to participate.

The offer consists on a cashback on daily net losses on any casino game, up to ₹250,000.

Only net losses from all rounds played in Casino games will be counted. Users with profit are not eligible to claim the cashback.

Players need to contact our Customer Support to claim the bonus after the completion period mentioned above.

Bonus will be issued to the player's account the following Monday.

The cashback money does not have wagering requirements. It will be credited as withrawable money on players´s account.

Players found guilty of multi account and/or same IP address will be excluded from the promotion. profits generated will be confiscated.

Players found abusing the promotion in any way, such as but not limited to, betting both sides of the binary games shall and will be excluded.

Betbarter holds the right to exclude any player without any reason.

All general T&Cs also apply to this promotion.

Betbarter is operated by Sky Infotech N.V. a limited liability company incorporated under the laws of Curacao with company Registration number 152377 with registered office at Abraham de Veerstraat 9 , Curacao P.O Box 3421 and is licensed and regulated by the Curacao authority as the regulatory body responsible holding a (Sub-license with License number 365/JAZ Sub-License GLH- OCCHKTW0707072017 granted on 6.07.2017).

Players are requested not to contact any untrusted sources for Betbarter.com accounts as this is an online site and they can only register independently without any agents. Only deposit through the account details generated by the system or provided by our official support team.